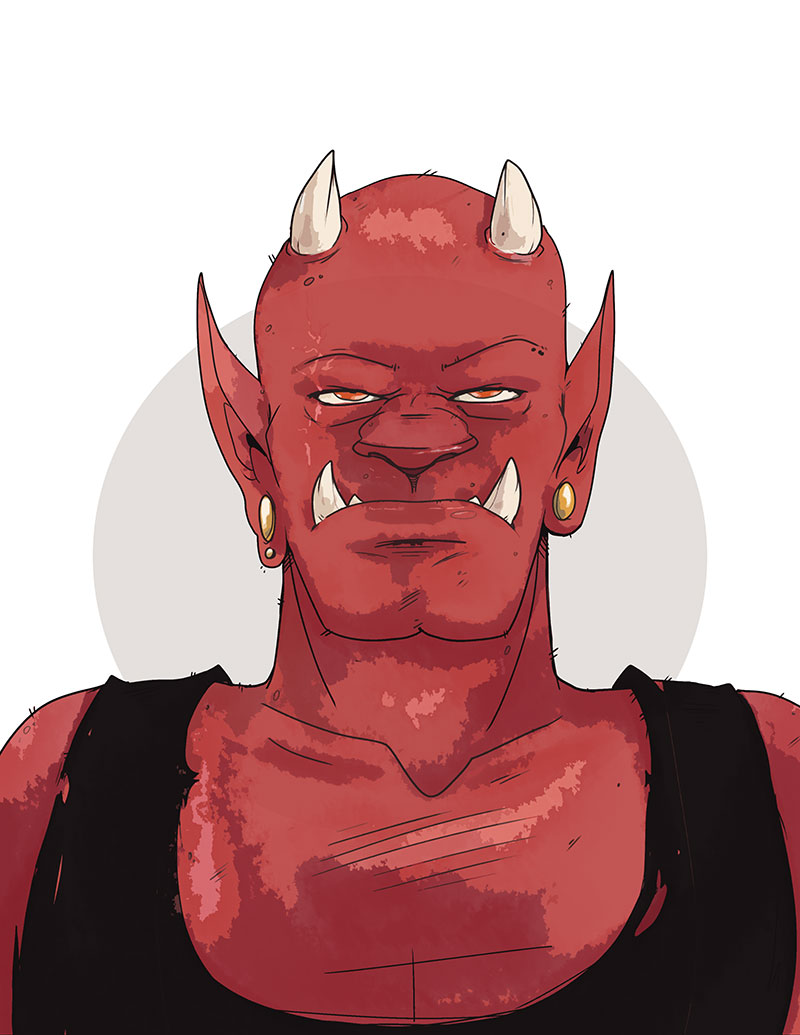 Demonic behaviour is difficult to observe or understand due to demonkind’s poor cultural compatibility with and low affinity for mankind. Since its inception, the SRA has recorded over a dozen demonic manifestations with equipment and protocols sufficient to verify the topics covered in this reference document. However, the unpredictable nature of demonic behaviour and the frequency of insufficiently documented human/demon interactions requires the SRA to treat the following facts as flexible.

Much of what humanity knows about demons comes from the notes of 19th century scholar Lilie Cross, whose efforts at exposing and cataloging demonic behavior aligns with most subsequent SRA research. Ms. Cross’s most prominent contribution to the field was recovered from notes she took in the days before her death during the Battle of Bucharest. Referred to informally as “Cross’s Trinity”, these three points represent the foundation of modern Demonology:

Interviews with Letheans — the only type of demon to demonstrate human speech — have yielded much information about demonkind, most of which is now known to be intentionally incorrect. The motivation for this campaign of deliberate misinformation is unclear, although the SRA’s Applied Theology and Xenopsychology departments agree that the contempt held by demonkind for man is a likely cause. However, there is some concern among theologians that in engaging with humans at all, Letheans may be applying an underlying strategy, the goals of which are unknowable at this time. First Director of Applied Theology C.S. Lewis speculated that lies or half-truths told by demons “may be the feints of pawns in a diabolical chess match” (Supernatural Management Summit address, Paris 1971).

As documented by Ms. Cross and further corroborated by the SRA, there are three known types of demon.

The most frequently seen caste of demon. Intelligent and gregarious, but also manipulative and fond of violence as a method of coercion. The only type of demon to even partially integrate with modern human society, generally in short-term advisory roles overseen by SRA ethics monitors (see Demonic Prescience in Government and Industry). Unregistered specimens frequently attempt to compromise human ethics and morals through intellectual or physical manipulation of human desires. Succubi and incubi are thought to be a sub-class of Lethean demon.

Rare and most likely to pursue humans who have committed betrayals, deceptions or acts of fraud (a condition identified in Cross’s notes as “Marked for the Ninth”, possibly in reference to Dante’s Inferno). Malebolgians first appear as vivid nightmares, and will manifest physically within a month of the first dream. Limited trials indicate that despite its feral nature and inability (or unwillingness) to speak, a Malebolgian is at least as intelligent as a human child. Its exclusive method of attack is a protracted physical assault, calibrated to cause maximum pain and trauma while preserving the victim’s life for as long as possible. A physically manifested Malebolgian will only disappear once its victim has died, regardless of the cause of death.

Less than ten Thanatosian encounters have been documented. Its manifestation is sudden, brief, and traumatic to all present. The Thanatosian appears as though having arrived from elsewhere at high speed. Its body, if it can be said to have one, is always parallel to its victim, even if its victim is prone or laying at an angle. The demon stops inches away from its victim with its appendages outstretched in a manner that intersects the victim’s chest and head. Eyewitnesses suffer a collective disorientation, generally accompanied by feelings of despair, longing and physical coldness that persists for several hours. A consequence of this phenomenon is the inability of any witness to provide specific details about the demon’s departure.

The victim is rendered comatose by the encounter, but shows no physical injury related to the attack. This coma is marked by brain activity that resembles dreaming, but rather than alternating with periods of reduced activity as seen in normal sleep patterns, this activity remains constant for the duration of the coma. All other bodily functions remain normal, and with proper care, the victim may live for many years in this state. No Thanatosian victim has ever revived.

The three demonic castes on record vary significantly in appearance from one another, and there is a lesser but still noteworthy degree of variation within each caste.

Letheans are hairless bipedal humanoids with red, grey or black skin that may be smooth, scaled or segmented. They exhibit symmetrical horn-like skeletal protrusions similar to those found in Orcs, although no other connection between that species exists. Fingers and toes end in claws formed from the same material as their horns. Letheans are sexually dimorphic and exhibit secondary sexual characteristics in line with humans, including genitalia, vocal pitch, and greater mass in male specimens. Contrary to portrayals in popular media, there have been no confirmed instances of a Lethean with a tail, or with equine or bovine legs.

Upon initial manifestation Letheans are generally nude, but some specimens — particularly those who elect to participate in human affairs — will acquire from sources unknown human clothing appropriate to the social context.

A hairless, grey— or black-skinned quadruped described as “a reptilian spider” (Dengeree, 1980) or an “infant dragon” (West, 1969). Malebolgians appear to be composites of elongated, squashed or otherwise distorted humanoid body parts combined into crawling, crab-like forms. The structure of each specimen varies, and in many cases multiple eyewitnesses cannot agree on the details of a single specimen, but the most consistently identified shape consists of four humanoid legs of exaggerated length radiating from a torso with a deep rib cage and pronounced spinal curve. Each leg terminates in one, two or four protrusions likened to a cat’s claw or a scorpion’s stinger. Its head is either a prolate or oblate spheroid with two, four or six eyes, always yellow in colour. Its mouth runs parallel to the axis of the head, and is equipped with teeth of various lengths and shapes to an extent that the jaws are unable to close.

Malebolgians vary in length. Their speed and hostile nature make accurate measurements difficult, but specimens as small as a housecat and as large as a dog have been observed. Lilie Cross claimed in her Bucharest notes that she was being pursued by a Malebolgian “the size of a great Bear”.

Unable or unwilling to speak human language, Malebolgians nevertheless produce a variety of chittering, clicking and bleating vocalizations, the purpose of which is unknown.

Some Letheans voluntarily participate in SRA registration and other administrative tasks. Through this compliance to human affairs, a demon may obtain employment in select industries, and terrestrial residence in Class 2 EH facilities. Registered Letheans exhibit a willingness to interact with humans in methods considered beneficial to mankind, and they may even attempt to forge non-destructive relationships. This type of engagement typically comes to an abrupt end when the demon de-manifests.

Demons are the most volatile Class II entities monitored by the SRA, and second only to Deities as the greatest potential non-human threat to our world. They are subject to the Supernatural Enforcement and Protection Act by fiat, but their ephemeral nature makes them extraordinarily difficult to regulate. With the exception of registered Letheans, all demons must be considered at large and extremely dangerous. Demonic manifestations must be reported to your local SRA Enforcement Branch immediately. Do not attempt to interfere with demonic activity or otherwise engage a demon unless it is a Lethean with SRA handlers present.

Attempts to invoke a demon for any reason is an internationally recognized crime that carries severe penalties.